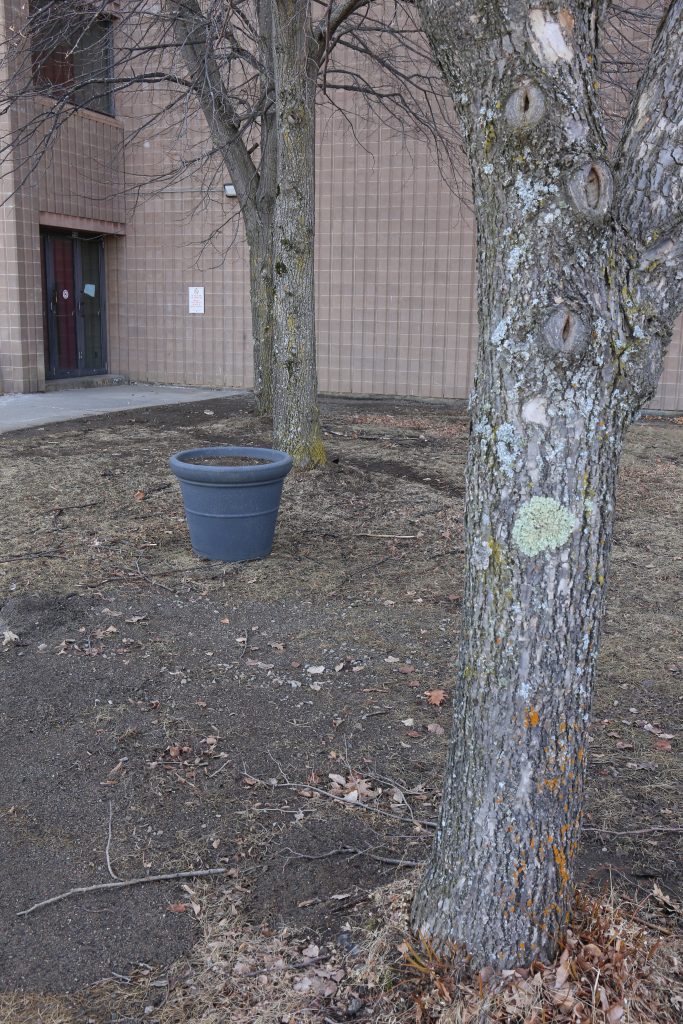 Trees: There is a cluster of several small-leaf lindens (heart-leaved or European linden – Tillia cordata) at the entrance to Centennial Building. The most spectacular feature of these trees are their abundant and aromatic flowers. Old trees are often the centrepiece of European village squares, where they traditionally provide shade and a meeting place for the old folk. The floriferous trees attract honey bees and produce excellent aromatic honey. Perhaps as introduced species, in our continental climate they flower very “cautiously”, anywhere from early June to August. Because they struggle a bit in our harsh climate, they likely release substances which help the establishment of lichen colonies?

Lichens: Looking closely (through a magnifying lens) at the bark of the lindens, you will quickly realize that there is a large variety of lichens growing here. This may be an overwhelming start! For this reason, concentrate on the linden tree closest to the walkway into Centennial Building, and the parking lot curb. The most obvious is the large greenish-yellow disk in front of your eyes. Concentrate on this area. The orange and yellow lichens will be dealt with later. 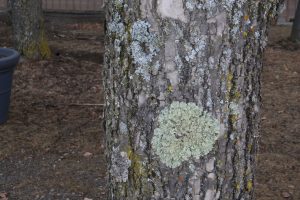 Fig. 1-2 Detail of the conspicuous disc of yellow green lichen on the linden tree closest to the curb. The other two lichens to look at here are the grey disk up and to the left (Fig. 1-5 and 1-6) and the grey disk to lower left (Fig. 1-7 and 1-8). 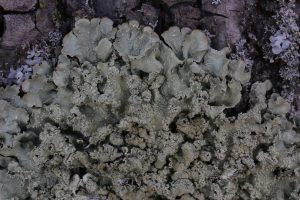 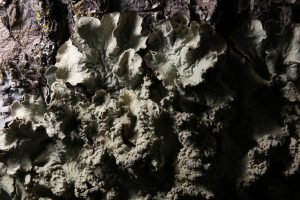 Fig. 1-3 and 1-4 (0.7X). One of the common greenish-yellow disk lichens in our area: Flavopunctelia flaventior (speckled greenshield). This “leafy” or foliose lichen is covered with fuzzy looking clusters of spore-producing soredia and whitish spots (breaks in surface) called pseudocyphellae. If the soredia are limited to only the edges (margins) of the lobes, you may be looking at a closely related species – Flavopunctelia soredica(powder edged speckled shield). Another similar looking lichen is Flavoparmelia caperata (common shield), which lacks the white spots of pseudocyphellae. The “flavo” root refers to the yellowish colour of these lichens, and they can be further distinguished in the laboratory by their different chemical content. 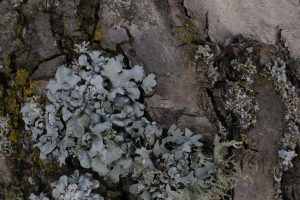 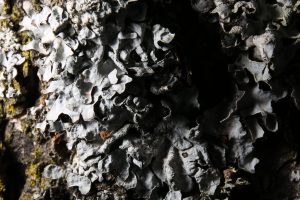 Fig. 1-6 (0.7X). This “hammered” feature is best seen in the bottom of the above figure. As well note the black “root-like” structures called rhizines to the left of center. 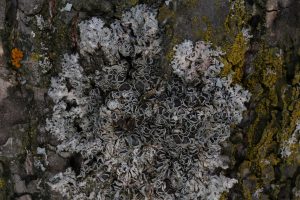 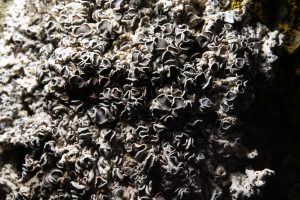 Fig. 1-7 Shows the fairly common Physcia aipolia (hoary rosette). The conspicuous black disks with white rim on the surface are the reproductive structures of the fungal partner, so called apothecia.

The white rims are characteristic of so-called “lecanorine apothecia”. There are at least 9 look-alike species listed in the Brodo book, and without looking for the 2-celled spores and chemistry, you likely will not differentiate these. All key features of this group are modified with words like “usually”, “commonly” or “frequently”. Good luck to the amateur lichenologists…….